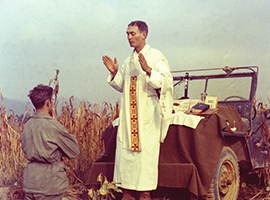 Father Emil Kapuan, who served as a U.S. Army chaplain during the Korean War, celebrates Mass in the field. Fr. Kapuan later died in a Korean P.O.W. camp and was awarded the Medal of Honor for his bravery there.  U.S. Government photo.

The annual observance of Veterans Day in the United States on November 11th  has it roots in the the armistice that ended World War I hostilities in 1918. The armistice between the Allied nations and Germany went into effect on the eleventh hour of the eleventh day of the eleventh month.  President Woodrow Wilson proclaimed thereafter that November 11 be observed as “Armistice Day.”  In 1954, Congress passed legislation that  renamed the federal holiday “Veterans Day,” in recognition of the service of veterans of all U.S. Wars.

Help us, dear God, to see Your face in every Veteran we encounter. Guide us as we imagine new ways to support Veterans and their families. Bring healing and peace to all who have been wounded physically, mentally and spiritually during wartime. Help us bring Your saving grace to heal the invisible wounds of war. We ask this in Jesus’ holy name. Amen.